What Is a Minimum Sentence for a 3rd Degree Felony in Florida? 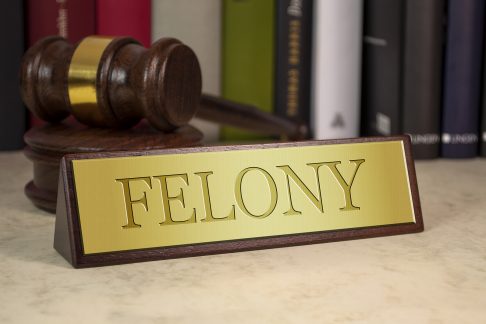 Being charged with a crime is incredibly stressful. You’re worried about the third degree felony charges you’re facing and don’t know what to do or who to turn to at this point.

So many questions are racing through your head. What happens when you’re charged with a third degree felony in Florida? Are you going to go to prison? If so, how long will your sentence be? Will you have to pay fines, too? Could you lose your job? Will this be on your record forever?

Even though you’re going through a difficult situation, the worst thing you could do at this point is hide under your covers and wait until your court date to see what happens. Instead, it’s time to take control and educate yourself about your charges and the possible outcomes. Then, you can find a criminal defense lawyer in West Palm Beach to help you fight your charges.

What Is a Felony?

For example, in Florida, capital or life felonies include murder, robbery with a firearm, and sexual battery. Each state classifies felonies, as well as misdemeanors, in its own way. Some states use Class A, Class B, etc. to classify felonies and misdemeanors, but Florida uses the degree system.

There are violent and nonviolent felonies. Violent felonies usually involve threatening violence or actually committing violence against another person. For example, if someone has a gun and they threaten to kill someone with it, they could face a felony charge… even if they never pulled the trigger.

A nonviolent felony would be something that is harmful to the public but not violent. For example, tax evasion and fraud are classified as felonies. If a person pretends to be a hedge fund manager and convinces people to give them money to invest into this phony hedge fund, then that person could be charged with a felony.

What Is the Minimum Sentence for a 3rd Degree Felony in Florida?

There is no minimum sentence for a third degree felony in Florida, but there is a maximum sentence of up to five years in prison. There is also a maximum fine of up to $5,000. Depending on the crime, the court may order the defendant to pay restitution to the victim.

Instead of giving the defendant a prison sentence, the court could also sentence them to probation for up to five years. The Florida Department of Corrections would supervise the probation.

What Crime Results in a Third Degree Felony Charge?

There are a number of crimes someone could commit to land a third degree felony charge in Florida. Some of them include:

You may not be familiar with some of these charges. Learning what the terms mean could help you understand the criminal charges you’re facing.

Grand theft involves intentionally and unlawfully taking property that is worth $300 to $20,000. Some types of theft that would be classified as grand theft in Florida include stealing a firearm, a motor vehicle, a stop sign, a commercially farmed animal, or a will.

Bribery involves offering a person who has power or influence money or something else of value in order to sway them. For example, if a person gives money to a cop to try to get them out of prison, this would be illegal and could result in a third degree felony charge.

There is a difference between child abuse and child neglect in Florida. According to Florida law, an individual “who knowingly or willfully abuses a child without causing great bodily harm, permanent disability, or permanent disfigurement to the child commits a felony of the third degree.”

Child neglect occurs when a caregiver fails to take the steps to protect a child. For instance, abuse classified as a third degree felony may include lightly shoving a child but not causing injury, while neglect could include intentionally not feeding a child for an extended period of time.

Exploitation of an elderly person means that a person exploits a victim who is 60 years of age or older and suffering from the infirmities of aging. A person may be found guilty of taking money out of an elderly person’s bank account without their knowledge, for instance, and be charged with a third degree felony. The same would be true if they exploited a disabled person.

In Florida, the recreational use of cannabis is illegal. If a person possesses more than 20 grams (25 pounds) of it, they could face a third degree felony charge. They could also face these charges if they possess less than 25 cannabis plants.

The law in Florida is intricate and can be confusing to someone who is unfamiliar with legal terms. If you’re charged with a third degree felony, you could try to research it online, but it’s always best to call a criminal defense lawyer in Florida as well. It’s like trying to diagnosis yourself by looking at WebMD; the information you find on your illness may be correct, but you could also scare yourself and believe you’re worse off than you truly are. Instead, it’s always a good move to turn to a professional for assistance.

What Can Happen As a Result of a Third Degree Felony Charge?

You know that if convicted of a third degree felony in Florida, you could possibly serve up to five years in prison and pay up to $5,000 in fines and restitution.

Or, you may have to go on probation for up to five years. If you get probation, you’ll be assigned a probation officer. The terms of your probation may include:

Additionally, felonies will stay on your record permanently if you don’t get them expunged.

Felons may have trouble finding work, since employers will see the third degree felony charges on their record. While it’s illegal for employers to discriminate against anyone, they would probably be hesitant to hire a felon. This is why many felons may resort to illegal means of making money after they’ve gotten out of prison.

If felons want to go to college, they may not be able to access Pell grants and could be ineligible for financial aid if they have drug convictions on their record. This makes it harder for them to stay competitive in the job market, especially if they don’t have a high school diploma, either.

Since landlords do background checks when renting to new tenants, felons could have trouble finding housing. They may have to live with family members or friends, but they could also unfortunately end up in a homeless shelter or on the street.

In Florida, felons who were convicted of third degree charges cannot vote until they complete their prison time, parole, probation, or other terms of supervision, and they have paid all the required fines, fees, restitution, and costs they were ordered to pay.

If someone committed a third degree felony and they were convicted, the bottom line is that they could have trouble moving forward in life after they’ve completed their sentence. That’s why it’s a good idea to hire a criminal defense lawyer in West Palm Beach to fight the charges.

How Do You Fight Your Third Degree Felony Charge?

A criminal defense lawyer will gather all the details about your case and see if there are any holes in the prosecutor’s story. There are so many possibilities that need to be explored. What if the cop who thought they caught you doing something did not properly conduct the arrest? What if the evidence was fumbled? What if a witness was lying? What if you were acting out of self-defense?

You never know what your criminal defense lawyer will find or figure out for you, which is why you need to contact one to determine your defense. While you may be worried about the financial implications of hiring a lawyer, you could have trouble making money, securing housing, and accessing higher education for the rest of your life. Paying to fight your charges now makes much more sense than suffering through a lifetime of financial issues.

Can You Get a Third Degree Felony Charged Expunged From Your Record?

A criminal defense lawyer in West Palm Beach can also help you get your third degree felony charge expunged from your record.

In Florida, you can expunge your record if the charges did not lead to a conviction or if your record has been sealed for 10 years or more. You could seal your record if you received withheld adjudication and completed your sentence.

Withheld adjudication is a sentence in which a judge will give the defendant probation but does not convict them of a criminal offense. To be eligible for expungement or the sealing of your record, you could not have had a previous arrest record expunged or sealed. In other words, this must be the first time you go through this process.

If your criminal record is expunged, then it’s taken down off of official government websites, it’s no longer public, and you can legally deny that you were ever arrested. This cn ould be extremely beneficial when you’re searching for a job or housing and trying to move on with your life after your court case.

In your time of need, Meltzer & Bell, criminal defense lawyers in West Palm Beach, are here for you. They will stand by your side every step of the process of your case involving a third degree felony. Our partners are on call 24/7, which means that you can reach out if you’re having an emergency at any time of the day.

We offer free consultations, which means that you don’t have to put any money down to access our help. In our initial meeting with you, we will let you know about our extensive experience and exactly how we can assist you.

One thought on “What Is a Minimum Sentence for a 3rd Degree Felony in Florida?”