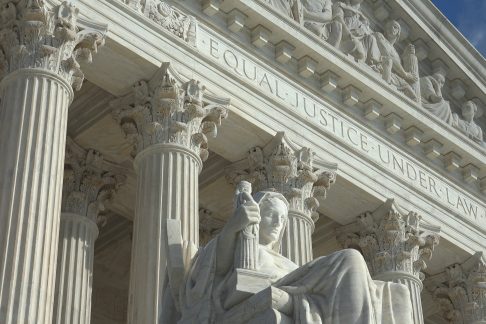 The U.S. Constitution’s Sixth Amendment promises every American citizen the right to an impartial trial. When it comes to serious crimes, many would assume that a unanimous jury decision would make a trial impartial. Although this is true for 48 states, in the U.S. there are two states, Louisiana and Oregon, who permit non-unanimous verdicts for serious crimes.

These states will no longer be able to convict defendants on serious crimes without a unanimous jury decision thanks to a new ruling by the U.S. Supreme Court on Monday April 20th, 2020. Five justices sided with a Louisiana man named Evangelist Ramos, who was found guilty by divided juries. This ruling has radically changed the possible outcome of Ramos’s future. Prior to the decision, Ramos had been convicted by a 12-member jury on a 10-2 vote for the 2014 murder of a New Orleans who was found in a trash can. Now the ruling gives Ramos a chance to pursue a new trial and receive a constitutional verdict.

The Supreme Court’s new ruling also overturns a 1972 Supreme Court set precedent. Before 1972, the Supreme Court generally applied the Bill of Rights to not only to the federal government, but also state jurisdictions.  The Apodaca v. Oregon decision suspended that notion after Justice Lewis F. Powell Jr, who cast the controlling vote, stated that unanimous verdicts are required in federal trials, but not for state jurisdictions. In the end, only Louisiana and Oregon would permit non-unanimous verdicts for serious trials and in Louisiana the law was effectively changed on January 1, 2019.

Justice Neil Gorusch wrote for the court in the 6-3 ruling regarding Ramos and thousands of other offender’s futures. Gorusch states that he believes the non-unanimous verdict requirements in both states traced back to racist policies that intended to reduce the power of non-white jurors and change the outcome of trials. Essentially, it would suppress any people of color’s opinions in a jury decision and ultimately incarcerate more non-white defendants.

The decision to require a unanimous jury verdict for serious crimes did not come without some backlash. There were three judges who were in dissent including liberal Justice Elena Kagan, conservative Justice Samuel Alito and conservative Chief Justice Roberts. The three judges wrote there was no reason compelling enough currently for them to decide to overturn the 1972 ruling. Justice Samuel Alito stated that the ruling “imposes a potentially crushing burden on the courts and criminal justice systems” for both Louisiana and Oregon’s governments.

Gorsuch and the five other justices, however, claim that the Sixth Amendment assumes unanimous verdicts for serious crimes and that the court has been following that example for years. In his opinion, Gorusch states “This court has repeatedly and over many years recognized that the Sixth Amendment requires unanimity.” Now, that the ruling has passed thousands of Americans who were convicted on divided juries can pursue new trials.

The news is fantastic for defendants and their defense attorneys everywhere now there is no fear of being unconstitutionally convicted. Ben Cohen, one of Ramos’s attorneys, has been one of the biggest voices to change these laws in Louisiana since 2004. He also works with the Promise of Justice Initiative, a non-profit dedicated to giving defendants the representation they deserve in unfair trials. Cohen states the organization is combing both Louisiana’s and Oregon’s case files to identify any convicts who were sentenced by a divided jury.