How Much Jail Time for Drug Trafficking? 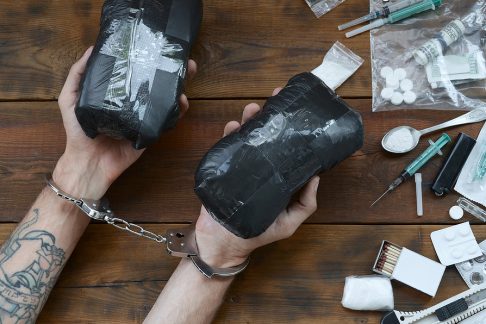 Due to the detrimental health and social effects of drugs and controlled substances, you may face harsh penalties if you are involved in such a case. Though there are various drug-related charges one may face, drug trafficking is the most serious one.

Although it’s a serious offense, drug trafficking is arguably the most misunderstood crimes. Most people think it’s the same as drug dealing and that perpetrators are hard life long criminals. However, that’s not an accurate assessment of the offense.

Read on to learn more about what such charges entail and how much jail time for drug trafficking you can expect.

What Is Drug Trafficking?

Drug trafficking charges are also known as drug distribution offenses. Beyond drug possession, they may also involve the manufacturing, purchase, sale, or delivery of illegal or controlled substances. As such, drug trafficking charges do not only involve the sale, delivery, or purchase of illegal drugs alone. You can face the charges if you are involved in the illegal sale of prescription drugs, such as opioids, hydrocodone products, and pain killers.

Compared to drug possession, trafficking is a more serious offense and qualifies as a felony. Along with the federal regulations against drug distribution, each state also has laws against it. In some states, trafficking charges will result in first-degree felony charges.

Beyond the sale, distribution, purchasing, and manufacture of illegal and controlled substances, weight and measurement play a key role in such charges. Whereas drug possession and drug trafficking are different charges, the quantity of drugs you have will determine the charges you’ll face.

Possession of drugs beyond specified amounts attracts drug distribution charges. As such, you can be convicted of drug trafficking even if you do not manufacture, sell, buy, or transport drugs. Though this may seem overly harsh, the purpose of such a regulation is to discourage people from involving themselves in drug trafficking in any capacity.

Some of the key things you should note about drug trafficking include:

As such, if you’re wondering about how much jail time for drug trafficking, it will depend on the magnitude of the charges and the state you are in.

Does Drug Trafficking Qualify as a Federal or State Crime?

Drug distribution is both a state and federal crime as there are laws governing it at both levels. Congress is responsible for setting federal drug trafficking regulations from which most state laws are modeled.

Considering the diverse nature of drug trafficking charges and the possibility of facing jail time, you must understand some of the elements that will influence your case:

Once you are found with drugs, the first thing that arresting officers will use to determine the sort of charges you may face is quantity. Such quantity specifications vary from state to state and depending on the drug in question. For instance, in some states, possession of 25 pounds or more of marijuana or 300 pounds of marijuana plants or more will qualify as trafficking. On the other hand, you may find that the threshold for a drug such as cocaine in the same state stands at 28 grams or more.

Possession plays a key role in drug distribution charges but on its own is not enough to get you convicted. Along with demonstrating that the quantity of illegal drugs in your possession is sufficient for drug trafficking charges, they must also prove it was intentional.

For instance, if you rent a car with 5 kilograms of illegal drugs hidden in the dashboard, you will not be convicted of drug trafficking as you are not aware of the presence of the drugs despite being found in possession. However, if you in any way have control of where the drugs are, or they are found in your personal effects, charges you will face drug distribution charges.

One of the biggest misconceptions about drug trafficking charges is that you must participate in the manufacture, sale, or distribution of the drugs. On the contrary, all that’s necessary for you to face such charges is being willingly in possession of an amount that exceeds legal restrictions.

Facing drug trafficking charges is a very serious matter, whether on a state or federal level. The penalties or jail time you’ll face depends on the state you’re in and the drug and quantity in question.  Depending on the severity of the charges, you may be facing years, possibly decades in prison.

Drug trafficking charges come with a minimum mandatory sentence for guilty persons. This means, regardless of the conviction, there is a mandatory period that you must remain in jail before you can be released on parole. As such, if the mandatory minimum sentence for your state is three years and you have been convicted for 15 years, you can only qualify for parole upon serving for three years.

In some cases, the prosecution may offer you a plea bargain where you agree to accept the drug trafficking charges against you. In turn, you will receive a probation sentence with specific court-ordered conditions that you must adhere to.

During the probation period, you will be monitored by a probation officer, with whom you may need to seek permission to travel outside the state. Part of the deal will also include agreeing not to break any other laws and random drug testing. Most of the time, probation lasts one year, but it can also be as many as three or more.

One of the ways Congress and state governments use to discourage drug trafficking is by issuing hefty fines. For state charges, you may face fines in the range of $25,000 to $100,000, and possibly higher. This pales in comparison to the penalties for federal drug trafficking charges that attract fines that can even exceed $10 million.

How Much Jail Time for Drug Trafficking?

Even if you are facing drug trafficking charges for the first time, you will likely face jail time exceeding one year. Depending on the gravity of your case, you may get over ten years and possibly a life sentence.

Loss of Rights and Benefits Due to Drug Trafficking Convictions

Beyond the basic rights, there are some federal benefits and civil rights one may earn as a citizen upon meeting certain criteria. Prime examples for these include federal school loans or the right to carry a firearm. Being a felony, a drug trafficking conviction may be accompanied by the loss of such rights and benefits. In some cases, there may also be restrictions to your voting rights, including losing them altogether.

If you fulfill certain conditions, such rights may be restored. However, you also face the risk of losing them completely if you face other felony convictions.

Although it’s difficult to estimate the actual value of the illegal drug market, resources such as Worldometers suggest that hundreds of billions of dollars, possibly trillions, are spent on illegal drugs each year across the globe. From such proceeds, drug dealers and traffickers make millions of dollars in profit, making the trade somewhat lucrative.

To make such efforts worthless, any proceeds and assets acquired directly or indirectly through drug trafficking are seized upon conviction.

If you are an individual who immigrated to the U.S., drug distribution allegations may have serious ramifications, such as immediate deportation after conviction. The same applies to citizens of other nations who may wish to visit or immigrate to the U.S. Even with family living here, they will be ineligible for a U.S. visa or citizenship.

Will You Need an Attorney for Your Drug Trafficking Charges?

Considering the severity of such charges, a drug trafficking conviction will come with significant penalties that may include years in prison. As such, you must begin preparing your defense immediately. In this regard, an experienced drug attorney will be an invaluable asset.

They will help you understand the charges, provide clarification on the possible penalties and jail time. More importantly, your drug lawyer will help you figure out the best defense for your case, which may result in a reduced conviction or dismissal of the charges.

Get a Drug Attorney you Can Count On?

Without adequate representation, it is difficult to get positive outcomes during drug trafficking charges. Beyond hiring an attorney, you need to choose one experienced with such cases and has a proven track record.

At Meltzer & Bell, P.A. DUI & Criminal Trial Lawyers, we have attorneys experienced with drug trafficking cases. Reach out to us today to find out more about how we can help you with your drug distribution case.