How Long Does a Felony Stay on Your Record in Florida? 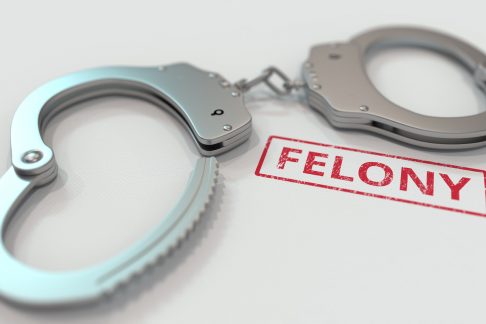 You’ve just found out that you’re being charged with a felony, and you’re worried about what it means for your life going forward. You definitely don’t want to go to prison, have to pay fines, go on parole, or attend court-ordered classes.

If you lose your case and are formally charged with a felony, you may also face consequences that could impact you on many levels. For instance, you could have trouble securing a job or housing. Then what? What’s going to become of your life?

Right now, the best thing to do is learn about what exactly a felony is, the kind of charges you may be contending with, and how long a felony will stay on your record. It could give you some peace of mind during this turbulent time.

And as you may know, arming yourself with the right knowledge is only the first step. The second step is to get in touch with a local criminal defense lawyer in West Palm Beach to discuss the details of your case and see what they can do for you.

What Does “Felony” Mean?

There are three types of crimes: infractions, misdemeanors, and felonies.

Infractions are the least serious types of crimes and are also called violations. Usually, traffic offenses are labeled as infractions. You don’t get the right to access a lawyer and there is no jury trial when it comes to this type of charge. You may get points on your license and/or have to pay a fine if you get an infraction.

Misdemeanors are more serious, and could result in up to a year in jail time in Florida. Crimes are classified as first-degree and second-degree misdemeanors. You may also have to pay a fine up to $1,000 and be forced to go on probation for up to one year.

Felonies are the most serious type of crime. In Florida, there are capital and life felonies and first-, second-, and third-degree felonies.

If you commit a capital or life felony, you could go to state prison for life and have to pay a fine up to $15,000, or be sentenced to the death penalty in extreme cases. There is no statute of limitations for capital and life felonies as well as felonies where a death occurred.

Felonies of the first degree could result in up to 30 years in state prison and a fine of up to $1,000. The statute of limitations is four years for a first-degree felony and three years for a second- or third-degree felony.

Additionally, if you have been convicted with two or more felonies and then you get a third conviction, you could have to go to jail for a longer amount of time.

How Long Will a Felony Stay on Your Record in Florida?

In Florida, a felony will stay on your record for all time, which can affect many different areas of your life.

If you work with a skilled criminal defense lawyer in Florida, however, you could possibly avoid a conviction in the first place so you don’t have any issues moving forward.

Can You Expunge a Felony From Your Record?

If you were already convicted of a felony in Florida, you cannot expunge it, or remove it, from your record.

If you weren’t convicted, then there are specific circumstances in which you may be able to expunge a felony from your record. For example, you must have completed your community service and probation and paid any required fines.

The process for expungement can be confusing, so it’s a good idea to hire a criminal defense lawyer to help out.

There are a number of crimes that could result in a felony charge in Florida. They include:

The circumstances of a crime will determine what the charges will be – and there are ways to defend yourself from being charged.

Specific Examples of Felonies in Florida

Sometimes, the legal language the criminal justice system uses can be extremely confusing. For example, while murder is pretty straightforward, aggravated assault is not. What’s the difference between aggravated assault and regular assault?

Any time there is a use of a deadly weapon like a gun, knife, or heavy object, you could end up being charged with aggravated assault. In Florida, aggravated assault is a third-degree felony, which means you could go to prison for five years, spend five years on probation, and have to pay up to $5,000 in crimes.

Aggravated battery occurs when there isn’t just a threat being made, but you actually knowingly cause permanent disability or disfigurement or great bodily harm. It could also involve the use of a deadly weapon or hurting someone you knew was pregnant, and it could result in a second-degree felony charge.

Child abuse is another crime that could be hard to understand. It occurs when you perform an intentional act that leads to – or could lead to – physical or mental harm to a child. In Florida, if you’re charged with child abuse, it’s a third-degree felony.

If you are involved in a home invasion, that could result in a second-degree felony charge in Florida, which carries with it up to 15 years in prison and up to a $10,000 fine. A home invasion is a burglary in which you enter an occupied or unoccupied dwelling with the intent to commit a crime. If you are armed or become armed during the process, commit battery or assault, or damage the dwelling with a car or in another fashion, you could face a much harsher first-degree felony charge.

Keep in mind that some felonies have multiple classifications. The charges will be determined after looking at how many people were stolen from and whether or not a weapon was used, for instance, in cases of identity fraud, stealing state funds, making false insurance claims, and fleeing from a police officer.

How Can You Fight a Felony Charge in Florida?

There are methods you can use to fight a felony charge in Florida whether you’re facing one of the first-, second-, or third-degree, or you’re dealing with a capital or life punishment. It all depends on what kind of crime you’ve been charged with and what happened during the alleged incident.

For example, let’s say you were charged with child abuse. However, maybe you were pulling your child out of a dangerous situation and you tugged on their arm too hard. Perhaps you have a vindictive ex-spouse who lied to the cops, or there is no evidence to prove that you actually did anything wrong to your child. After all, you love them and would never harm them.

If you were carrying a concealed weapon without your permit, maybe you sent in your renewal but it hadn’t been processed yet. Or if you were charged with assault, you could have been defending yourself against someone who was threatening you.

You can rest assured that the police and prosecutor will need to provide sufficient evidence like objects from the scene of the alleged crime, security camera footage, and witness statements in order to attempt to charge you. But so much can go wrong during that process. The prosecutor could botch the evidence, or the cop might not have read you your Miranda Rights while you were getting arrested. You never know.

The only way to figure out whether or not everything was done properly, and if you have a strong defense, is to contact a local criminal defense lawyer in West Palm Beach for help.

What Happens If You Are Convicted?

If you are convicted, you could have to go to prison, pay fines, and go on parole. You may never be released from prison depending on the severity of your crime. Once you do get out of prison in Florida, you will have to go on parole. Usually, it won’t exceed two years.

While in prison, it’s advisable to be on your best behavior and to follow the rules at all times. You should also pay the fines that the court orders you to pay and obey the orders from your parole officer. This means you might have to maintain employment, have a permanent residence in place, avoid traveling out of state, not contact your alleged victims, refrain from criminal activities, go to drug and alcohol meetings, and submit to drug tests. If you violate the terms of your parole, you could go back to jail for a short period of time or to prison for a longer sentence.

Life as a felon can be rough. Let’s say you want to go to college. You could be ineligible for certain funding to get your education because you have a felony on your record. In addition, since prospective employers can see your criminal record, you could have trouble getting a job. Landlords might not want to rent to you either because they’re scared. You could also lose your right to vote.

Thankfully, there is hope. You could live in a halfway house, which is a supervised living environment where you reside with other ex-prisoners until you can find a place of your own. If you have family members who are willing to help, you can call on them for assistance with finding a home.

Some employers get tax incentives from the government to hire ex-felons, so you could land a job with one of them. If you work hard and prove yourself, you could move up in the company in no time.

In terms of your education, you could go to a cheaper community college or take out private student loans to get your degree. If you do well academically, you could become eligible for a scholarship.

Your best hope could be to hire a criminal defense lawyer who will assist you in fighting the charges in the first place. Then, you won’t have to worry as much about what the future holds.

If you’re facing felony charges in Florida, then Meltzer & Bell, experienced criminal defense lawyers in West Palm Beach, are here for you. Simply call us or email us with the details of your case. We’ll let you know how we can help in your time of need and offer you some much-needed answers.

We look forward to hearing from you and working on your case.