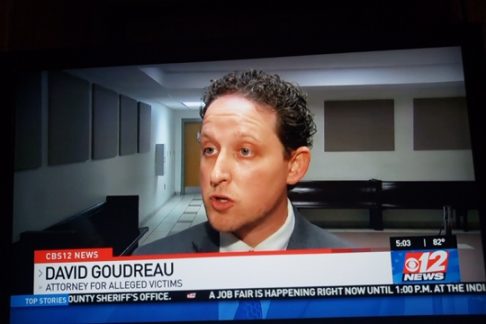 An intoxicated off-duty Palm Beach County Sheriff’s deputy is now facing multiple charges for allegedly threatening three people in their car on October 12. That next Thursday, law enforcement arrested Jerald Samuel Alderman for three counts of aggravated assault with a firearm and one charge for using a firearm under the influence. The act was recorded on a cellphone by one of the reported victims and posted on Facebook shortly afterwards.

The video has been viewed thousands of times and showed Alderman at the side of the victim’s car. In the video, Alderman states that “If I see you downtown again tonight, guess what’s gonna happen?” When the driver asks what would happen next, Alderman yells at the three victims and bangs his firearm on the car three times. Later, Alderman stated to city officers who witnessed the interaction that the three victims were allegedly breaking into cars. That night there were no reports of car break-ins in that area.

Meltzer & Bell, P.A. have taken on the case and now represent the three victims who Alderman was threatening. This Tuesday afternoon a risk-protection hearing was held at the city’s request to prohibit Alderman from buying or possessing any guns for the next 12 months.

David Goudreau, one of our skilled associate attorneys, is currently representing the three victims. His clients were prepared to testify at the hearing if Alderman didn’t agree to the order. However, an agreement was reached so Goudreau’s clients weren’t asked to take the stand.

“We were expecting a full-blown hearing with testimony from both sides today,” Goudreau stated to news outlets after the hearing. He later went on to claim that, “We are happy with the outcome today and respect the fact that he did agree to the risk-protection order.”

Scott Richardson, who is the defense attorney for Alderman, stressed the agreement to the risk-protective order was in no way an admission to criminal allegations. It’s possible that Richardson will ask for the order’s length to be shortened after the verdict of the criminal case is decided. Until then, Alderman cannot own or buy guns until October 29, 2020.

A risk-protective order is often referred to as a “red flag law,” which is a legislative effort to restrict gun access to people who are considered at high-risk to abuse them. It is a component of the Marjory Stoneman Douglas Public Safety Act. The legislation was passed three weeks after the mass shooting at Parkland high school on February 14, 2018.

The act also includes bans on bump stocks, a raise in the minimum age to buy a gun, and a three-day waiting period on any kind of gun purchase. In addition, a person under a risk-protective order cannot buy any guns legally because all gun sellers are notified of their status immediately afterwards. Since the bill went into effect last year more than 70 petitions for risk-protective orders have been filed by the city or concerned family members.