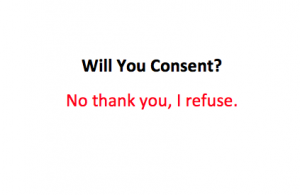 Florida’s implied consent statute creates a legal fiction that anyone who obtains a Florida driver’s license or drives on the roads of this state will “consents” to a lawfully requested blood, breath, or urine test when an officer has probable cause of DUI.

Despite this legal fiction, when a person is actually arrested for DUI, he or she might decide to refuse to submit to the breath, blood or urine test. Recent statistics in Florida show that more than 40% of DUI cases result in the arresting officer finding that the suspect refused a chemical test.

Florida law already provides for harsh penalties when a person refuses a lawful test including an immediate 18 month license suspension with no possibility of a hardship license.

Additionally, at the trial, the fact that the defendant refused testing even knowing that it would result in an immediate administrative license suspension is admissible at trial.

Furthermore, the prosecutor generally gets to argue during the DUI trial that the defendant refused to test because he knew that if he submitted the results would indicate guilt (often called “consciousness of guilt argument”).

But then the Florida legislature went one step further by making the second refusal a separate and independent crime. A second refusal can be charged as a first degree misdemeanor, punishable by up to 12 months in jail and a $1,000 fine. Therefore, if your driver’s license was previously suspended for failing to submit to a lawful test (the administrative suspension) even if you were not convicted of the DUI, then if you refuse a second time the prosecutor can charge you with:

Section 316.1939, Florida Statutes (2013) states that a first degree misdemeanor is committed when:

Although the DUI defense attorneys at Meltzer & Bell, P.A., in West Palm Beach in Palm Beach County, were not involved in the case, we recognize the important role that these orders in county court cases throughout the State of Florida have on our pending cases. We strive to stay current on recent changes in the law that impact DUI defense.

The Court struggled with the different between “actual voluntary consent” as an exception to the warrant requirements of the 4th Amendment and Florida’s “implied consent” created by the Florida Legislature. The Court reasoned:

“The consent granted by the implied consent statute must be equated with Fourth Amendment consent since a breath, blood or urine test is a search without a warrant. If it is Fourth Amendment consent, then under prevailing law, it can be withdrawn without penalty. This presents a logical conundrum, particularly considering the long standing existence of the implied consent statute.

It may be that the answer lies in the recognition that in this context, the reasonable expectation of privacy while driving a vehicle is less and constitutional rights are less protected when people engage in this activity. For instance, there is no Fifth Amendment right against self-incrimination because compelling a breath, blood or urine test “is not an interrogation of constitutional proportions.” State v. Busciglio, 976 So. 2d 15 (Fla. 2d DCA) rev. denied, 992 So. 2d 819 (Fla. 2008).

Likewise, there is no Sixth Amendment right to confer with counsel prior to submitting to a test, either at the roadside or at the station. Id. (citation omitted). Perhaps, as Judge David Foxman suggests in an order on this issue entered this date, the implied consent statute must be recognized as its own exception to the warrant requirement, but if so, that must be done by judges not sitting in county court. State v. Caporuscio, et al., Case No. 2013-318342MMDB.”

The court ultimately denied the criminal defense attorneys’ motion to dismiss charge of refusing to submit to lawful chemical or physical test of breath, blood, or urine after having driving privilege previously suspended for a prior refusal. The court found that Florida’s implied consent statute provides “consent to search” as an exception to Fourth Amendment warrant requirement.

Therefore, the Court found that Section 316.1939 is not unconstitutional on its face or as applied to defendant because it criminalizes the exercise of right to refuse to consent to a blood, breath, or urine test. The Court certified the following question:

IF THE IMPLIED CONSENT STATUTE PROVIDES CONSENT TO SEARCH AS AN EXCEPTION TO THE FOURTH AMENDMENT WARRANT REQUIREMENT, THEN CAN THAT CONSENT BE WITHDRAWN BY REFUSAL TO SUBMIT TO AN OTHERWISE LAWFUL TEST OF BREATH, BLOOD OR URINE AND CAN THE SECOND SUCH REFUSAL BE A CRIMINAL OFFENSE?

Finding an Attorney for the Second DUI Refusal in West Palm Beach, FL

Only time will tell whether the Florida Supreme Court will find that Section 316.1939, which criminalizes a second refusal to submit to testing after a DUI arrest, is unconstitutional.

If your DUI case in West Palm Beach or Palm Beach County involves a refusal to submit to testing, a charged for a second refusal under Section 316.1939, or a warrantless breath blood or urine test taken without free and voluntary consent, then contact a criminal defense attorney at Meltzer & Bell, P.A., with offices at 601 N Dixie Hwy, Suite B, West Palm Beach, FL, 33401.