Recent surveys have found that marijuana use among college students is increasing at a larger and faster rate than ever before. Studies show that approximately 10.1% of college students use marijuana, a substantial increase from 5.9% in 2014.

Moreover, there have been reported increases in marijuana use among college students in places like Oregon, where recreational use is legal.

Marijuana is not legal for recreational use in Florida, however, and as new uses such as dabbing, emerge, Florida lawmakers are punishing marijuana use more harshly.

Often times, if a college student is being charged with marijuana possession, it is his or her first time being exposed to the criminal justice system.

To find out more information about how being a first-time offender for marijuana possession charges can help you in your defense, contact Meltzer & Bell, P.A..

Our attorneys are experienced and dedicated litigators who fight for the best possible result for our clients. If you or someone you know is a student at the University of Miami, Palm Beach Atlantic University, South University, or any college in the Palm Beach County, or Miami-Dade County area, and are facing criminal charges for marijuana use, then call Meltzer & Bell, P.A..

Call Meltzer & Bell, P.A. to schedule a consultation with one of our experienced criminal defense attorneys. 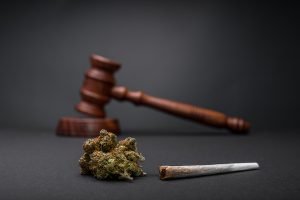 Marijuana, (also known as weed or pot), is the most commonly used drug in Florida and across the United States. Given that, in Florida, small amounts of marijuana is exempt from being classified as a Schedule I substance. Thus, possession of less than twenty (20) grams of marijuana is charged as a first-degree misdemeanor, punishable by up to twelve (12) months in jail and up to $1,000 fines.

Although the State has relaxed marijuana possession charges, the penalties may still be step and individual do not always have the opportunity to enter into a diversion program. Additionally, if a person is found guilty of marijuana possession, not only does he or she face the penalties listed, but also a conviction may result in an automatic Florida Driver’s License Suspension.

Little do most individuals, especially college students, know is that not only does Florida law punish possession of marijuana, it also punishes the act of passing it around in the typical marijuana smoking circle.

Law enforcement agencies around the country have reported a substantial increase in THC concentrate use. Tetrahydrocannabinol, also known as THC, is the active component in marijuana that gets the user “high.” Students across the country have been using concentrate by “dabbing.”

Dabbing refers to a method of THC concentrate consumption that involves heating a “dab” of THC concentrate until it vaporizes and the user inhales. While THC concentrate, also known as budder, hash, oil, or wax, is substantially more potent than the green leafy substance, it is also punished a lot more harshly than the regular plant-like substance.

While students do not often find themselves subject to serious felony offenses for marijuana possession, students who do are often those who sell marijuana out of their college apartments or dorm rooms or those who are caught with concentrate. Some examples of felony marijuana charges include:

Generally, first-time offenders who are charged with simple marijuana possession are usually offered the opportunity to enter a diversion program. Diversion is similar to probation, but upon successful completion of a diversion program, the individual may be able to have adjudication withheld on his or her case.

Second and subsequent marijuana offenses do not always have such luck. A second offense for marijuana often results in up to twelve months (12) of probation, community service, and regular drug screenings.

Find an Attorney for Students Charged with Marijuana in Palm Beach County, FL

If you or someone you know who is a student in Florida, particularly in West Palm Beach or in the surrounding areas of Broward County, or Miami-Dade County, and you need help fighting a marijuana possession charge, contact Meltzer & Bell, P.A..

Our attorneys are experienced criminal defense attorneys who diligently fight for the rights of those charged with marijuana crimes. Our office is located in West Palm Beach Florida, but we fight for clients throughout South Florida.