A felony charge is extremely serious. It means at least a year in prison. Many felony convictions carry mandatory minimum sentences that can result in several years in prison. In some cases, it could mean decades in prison, life behind bars or even the death penalty. If you are under investigation for any type of felony or have been charged with one, it is critical that you act immediately to secure legal representation.

With dire and lifelong consequences, it is important that you have an experienced attorney fighting for your rights if you’ve been charged with any type of felony. At Meltzer & Bell, P.A., we fight for people who have been accused of the most serious allegations. Contact an experienced West Palm Beach felony lawyer from Meltzer & Bell, P.A. today.

The team of attorneys at Meltzer & Bell, P.A. are seasoned, qualified criminal defense attorneys. Also, our partners are available to you 24 hours per day, 7 days per week. Call us at (561) 557-8686 to set up a consultation.

Definition of Felony Under Florida Law 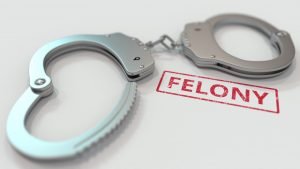 A “felony,” under Florida Statutes Annotated § 775.08, includes any charge for which the penalty could include death, life in prison or a year or more in a state penitentiary.

Felonies include a wide range of common charges, including:

The penalties for a felonies largely depend on the grading of the felony:

Some charges carry specific, additional penalties. Most drug trafficking charges, for example have mandatory minimum sentences. For these charges, there is nothing that you can tell the judge to convince him or her to reduce the sentence if you are convicted. For sexual battery or other charges, you will have to register as a sex offender.

Under Florida and Federal Law (18 U.S.C. § 922), a person convicted of a felony will never be allowed to carry a firearm.

Under Florida Statutes Annotated § 775.084, a person may be designated as a habitual felony offender once he or she is convicted of a third felony. A habitual violent felony offender is a person who has been convicted of one of several offenses, including sexual battery, robbery, aggravated child abuse and other offenses.

If you face felony charges, it’s extremely important that you promptly seek the services of a qualified attorney. At Meltzer & Bell, P.A., we have vast experience representing people facing accusations of serious offenses. Contact a West Palm Beach felony lawyer at (561) 557-8686 to fight for your rights.