Transactions to convicted felons and others are prohibited. You will likely be charged in federal court, and a conviction can result in up to 10 years in federal prison. Even for many otherwise legal transactions, you are required to have a federal firearms license.

Federal weapon convictions come with harsh consequences, and a successful defense against any federal weapon charge takes someone with in-depth knowledge of the numerous elements of a federal weapon case. If you have been arrested by the ATF, FBI, or other federal agency for a weapon offense in West Palm Beach, Boca Raton, Boynton Beach, Greenacres, or Wellington, take the important first step of your Palm Beach County federal weapon defense strategy and call Meltzer & Bell, P.A. immediately.

Our knowledgeable West Palm Beach criminal defense lawyers have over two decades of experience defending clients like you. To learn more about what Meltzer & Bell, P.A. can do for your federal weapon case in Palm Beach County, call (561) 557-8686 today and schedule a free initial case consultation. 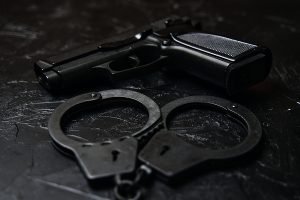 The most common federal weapon offense you can be charged with is “trafficking guns and weapons.”  Violations of 18 U.S.C. § 922(d) can result in up to a decade in federal prison if you are caught selling, giving, or otherwise distributing any gun or ammunition to any person who:

While the federal law states that the firearm or ammunition must be transported across a state line for the law to apply, federal courts have held this to apply to basically any gun or ammunition possessed in the United States. If you sell, give, or otherwise distribute a firearm or ammunition to a prohibited person, you can be convicted of a federal weapon offense, even if the transaction takes place entirely inside the state of Florida between two Florida residents.

Trafficking guns or ammunition to a person under the age of 18 can also result in you being charged with a federal weapon offense.  If convicted of weapon trafficking to juveniles under 18 U.S.C. § 922(x)(1), you face up to one year in prison. If a court finds you had reason to believe the juvenile would commit a violent crime with the gun or ammunition, you face up to a decade in federal prison.

You may also be charged with a federal weapon offense in other circumstances, for example to conduct most transfers of firearms or ammunition you need a federal firearms license, and violation of this requirement can result in a federal weapon charge.

If you have been arrested and charged with a federal weapon offense anywhere in Palm Beach County, including West Palm Beach, Royal Palm Beach, Delray Beach, Jupiter, Lake Worth, or surrounding areas, contact Meltzer & Bell, P.A. It is best to contact an experienced Palm Beach County criminal defense attorney as soon as possible after being arrested.

Lawrence Meltzer and Steven Bell are skilled and perceptive Palm Beach County federal weapon defense lawyers with over 20 years of criminal defense experience. Your first consultation with Meltzer & Bell, P.A. is free, so call (561) 557-8686 today and schedule your appointment.