If you have been arrested for your 2nd DUI in West Palm Beach, our second DUI lawyers can help you fight your charges and protect your rights. After an arrest for a second DUI in Palm Beach County or the surrounding areas in Florida, you basically have two cases pending against you.

The first case is with the Department of Highway Safety and Motor Vehicles (DHSMV) if it administratively suspended your driver’s license based on an alleged refusal or a BAC of .08 or over. For that administrative case, it is imperative that you hire an attorney to demand a formal review hearing to fight the suspension. The attorney can get you a 42-day permit so you can keep driving to work while your attorney prepares for the hearing.

If your attorney wins the hearing, the administrative suspension of six (6) months to eighteen (18) months comes off your record entirely. Even if you do not get the administrative suspension invalidated, your attorney will be able to gather important information during the hearing that can be used to fight the criminal charges.

The second case is in court. Your DUI attorney will fight to get the charge reduced or dropped entirely. The goal in many of these cases is avoiding a DUI conviction. Your penalties depend on a variety of factors including whether the prior DUI conviction occurred within or outside five years of the new arrest.

Attorney for a Second DUI in West Palm Beach, FL

After an arrest for a second DUI in Palm Beach County, contact an experienced criminal defense attorney at Meltzer & Bell, P.A.. We can help you understand the charges against you, the potential penalties, and the best way to fight the criminal charges.

With offices in West Palm Beach and Fort Lauderdale, FL, we fight DUI cases throughout Palm Bech County and Broward County, FL. We can help you fight administrative suspension and criminal charges. Call (561) 557-8686 to discuss your case.

Punishments for a Second DUI Outside of Five (5) Years 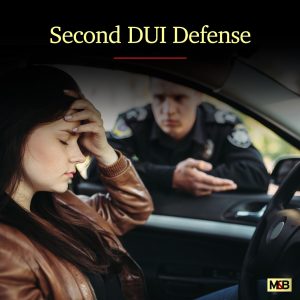 If the second DUI occurred more than five years from the first DUI conviction, then the statutory maximum penalties include:

Penalties for a Second DUI Within Five (5) Years

If the second DUI occurred within five years of a prior conviction then the following penalties apply: