Driving under the influence in Florida is a criminal offense. Even a seemingly minor misdemeanor first DUI offense can result in long-term ramifications and significant penalties. A DUI conviction can stay on your record for up to ten years, hence the need to hire a first DUI attorney in West Palm Beach when facing charges.

It’s illegal to drive in Florida if your BAC level exceeds 0.08. The penalties you face depend on your BAC level and prior DUI convictions. A first DUI lawyer understands Florida’s DUI laws and can work tirelessly to protect your rights and get the best possible outcome in the case you’re facing.

The Peculiarity of First-Time DUI Cases

First-time DUI charges are unique, especially when compared to subsequent DUI charges. The penalties handed down to first-time DUI offenders tend to be less harsh than those handed to repeat offenders. Most people facing DUI charges for the first time are students, recent graduates, and young professionals.

Often, these individuals find themselves behind the wheel after unknowingly having one too many alcoholic drinks. With an experienced attorney from the law offices of Meltzer & Bell P.A., you have a high chance of having your charges reduced or entering the DUI diversion program.

First-time offenders in Palm Beach County are eligible for the DUI diversion program. The program is meant to rehabilitate first-time violators and give them a second chance rather than punishing them outright. However, not all first-time DUI offenders qualify for this program.

For instance, you may not qualify if you’re facing DUI with accompanying property damage, felony, or possession charges. Furthermore, you must have a valid driver’s license and no prior prison sentence. You’re also not eligible if you were in a crash when you got arrested for driving under the influence.

The potential penalties for DUI charges are significant, regardless of whether you’re a first-time or repeat violator. For this reason, it’s best to have an aggressive criminal defense lawyer from the time you get arrested. Typically, license suspension is the first penalty DUI offenders face.

Your attorney can help you secure a hardship license as soon as your regular license gets suspended. This shields you from the impact of license suspension, especially if your line of work demands driving around.

At Meltzer & Bell P.A., we know how to leverage the advantages first-time DUI offenders have. When you come to us, our team will get down to work immediately and secure the best possible outcome for you. We don’t want your case to drag on for long, which is why we fight for a timely conclusion to your case.

As a first-time offender, your conviction may include a fine of $500 to $1,000. The penalties are likely to be more severe if your blood alcohol content level at the time of arrest exceeds 0.15. The minimum fine for enhanced DUI violations ranges from $1,000 to $2,000.

Under Florida DUI laws, an ignition interlock device (IID) may get installed in first-time offenders’ vehicles if a court orders it. If your BAC level exceeds 0.15, you may be required by the court to have an IID for at least six months.

If found guilty, a court may suspend your driver’s license for at least 180 days. If driving a vehicle forms part of your occupation, the chances are you won’t have a source of income during the license suspension period. A DUI defense attorney can fight the revocation and have your license reinstated.

You face up to six months in county jail if found guilty of driving under the influence. For instance, you face a jail time of up to nine months if there was a minor inside the vehicle when you got arrested. Besides, a DUI charge involving excessive speed may also attract more severe jail time.

Besides the conventional DUI penalties, the court may ask you to enroll in a DUI school. Typically, first-time DUI convictions result in mandatory 12 hours of enrollment in DUI school. It can either be broken down into three four-hour sessions or two six-hour sessions.

There will be a substance abuse evaluation at the end of the requisite 12 hours. During the session, the facts of your DUI case will get discussed alongside recommended further treatment if necessary. From the evaluation, you may be required to undergo substance abuse counseling, typically on an outpatient basis.

The court may sentence you to probation if you’re found guilty of driving under the influence. Probation rules in West Palm Beach County require violators to report to a probation officer once a month. They must also pay $50 monthly for that privilege.

Besides reporting to a probation officer and paying $50 monthly, you may not:

Getting a Hardship Driver’s License

If your driver’s license gets suspended, your freedom won’t be the only thing at stake. For instance, you may not be able to drive to work, medical appointments, or even take your children to school. Fortunately, we’re here to help you get a hardship license that allows you to keep driving as the case proceeds.

Reinstating Your License After a DUI Conviction

A first-time DUI conviction often results in a 6-month driver’s license suspension unless a hardship license gets granted. To have your license reinstated, you need to pay the necessary fee to the Florida DMV besides meeting all the court-mandated requirements. These include attending DUI school.

Reinstating your driver’s license may also require proving you possess a bodily liability insurance cover. Our attorneys can help you apply for driving license reinstatement and expedite the process. This way, you can recover your driving rights within the shortest period possible.

After getting arrested for driving under the influence in West Palm Beach County, you’re likely to face two proceedings; a criminal court case and an administrative DMV hearing. During the arrest, the law enforcement officer will impound your license and provide a “Notice of Suspension.” This will act as a temporary driver’s license for 30 days.

You have ten days from the date of your arrest a request a DUI hearing with the Florida DMV. This hearing is meant to determine whether your driving license will get suspended after one month. You can avoid a driver’s license suspension if the DMV rules in your favor.

Your driver’s license will get automatically suspended after thirty days if you fail to schedule a DMV hearing within ten days of your arrest. Hiring a DUI defense attorney means you will get represented in criminal court and during the DMV proceedings.

What Should You Do After a First-Time DUI Arrest? 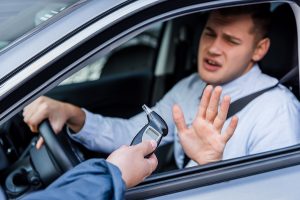 According to Florida Law, driving under the influence is a criminal offense. Anything you say or do following your arrest can be used against you. Nonetheless, here are two critical measures to take to protect your rights:

1. Avoid Talking to the Police

Nothing is as scary and confusing as getting arrested for DUI. You may want to try explaining yourself and talk yourself out of the situation, but it’s never a good idea. What many people don’t know is that talking to law enforcement officers without an attorney isn’t advisable.

Since you’re intoxicated, you’re likely to slip up and potentially make an incriminating statement that worsens your situation. During the arrest, an officer must read you your Miranda rights, including the right to stay silent. Although the arresting officer may question you at the scene, you’re not obligated to answer.

The decision to stay silent won’t aggravate your offense, and neither does it amount to the obstruction of justice. Provided that you don’t willfully construct, resist, or delay the arresting officer from performing their duties, you won’t face any extra charges.

The last thing you want is to face hefty penalties if you have a DUI conviction on your record. It limits your access to employment, education, and even credit opportunities. You have a right to an attorney like other suspects in police custody, and you shouldn’t hesitate to exercise it.

West Palm Beach prosecutors are known to be tough, and a conviction could mean lifelong legal consequences. Hiring an experienced and proven DUI defense attorney is your best chance to defend your rights and fight the charges you’re facing.

A first DUI conviction can be life-changing. Even a minor penalty such as having your license suspended can change your life significantly. At Meltzer & Bell P.A., we have the expertise to develop solid defense strategies for each DUI case we handle. The first DUI lawyer assigned to your case may argue that:

How a First DUI Attorney Can Help

DUI laws in West Palm Beach County keep changing. For this reason, fighting DUI charges can be confusing and complex. As a layperson without extensive legal damage, it’s nearly impossible for you to build an effective defense that ensures you end up with a fair settlement.

The attorneys at Meltzer & Bell P.A. boast decades of experience defending first DUI violators. When you come to us, we can put that experience and everything else at our disposal to work for you and protect your rights. We understand that first-time DUI offenders are often individuals who get caught up in the moment.

As with other criminal cases, the outcome of your DUI case depends on its circumstances and the expertise of the defense team you choose. At Meltzer & Bell P.A., we’re dedicated to defending the rights of first-time DUI offenders. So, if you or a loved one is facing DUI charges in West Palm Beach County, contact us to schedule a free case review with our first DUI lawyers.