After an arrest, the officers will ask the driver to submit to a breathalyzer test on the Intoxilyzer 8000 to determine the alcohol content of the driver’s breath.

Don’t enter a plea in a DUI checkpoint case without talking with us. We can help you obtain the operational plan and guidelines created for your particular checkpoint. Any mistake in the plan or the implementation of the plan in the field can result in evidence in your case being suppressed and all of your charges being dismissed.

Motions to Suppress in DUI Checkpoint Cases in Florida

The issue in many of these cases is whether the operation plan provided for too much discretion to officers in the field when questioning motorists stopped during the roadblock. Although the State will maintain that the roadblock met the requirements of the Fourth Amendment, the trial courts in Palm Beach County will often find that the operational plan for the DUI checkpoint does not pass constitutional muster.

The defense will often argue that the operational plan was insufficient because it permitted the police to detain drivers based on other possible means which may be used for detecting impairment and that the guidelines are vague and procedures are undefined. If the guidelines are not sufficient then the operational plan permits the of?cers to detain citizens with relatively unbridled discretion.

The Florida cases governing the constitutionality of sobriety checkpoints (also called DUI roadblocks) are State v. Jones, 483 So.2d 433 (Fla.1986), and Campbell v. State, 679 So.2d 1168 (Fla.1996). The Florida Supreme Court has found it to be “essential that a written set of uniform guidelines be issued before a roadblock can be utilized.” Jones, 483 So.2d at 438.

The officers in the field must be governed by a set of neutral criteria so as to minimize the discretion of the field officers. “Written guidelines should cover in detail the procedures which field officers are to follow at the roadblock.” Id.

The guidelines should set out procedures regarding the following:

In Ambrose v. State, 15 Fla. L. Weekly Supp. 343d (Fla. 20th Cir. Ct. 2007), the case relied upon by the trial court in granting the motion to suppress, it was determined that a motion to suppress evidence should have been granted because the checkpoint plan of the local sheriff’s office did not pass constitutional muster. The Court determined that the guidelines were insufficient to minimize the discretion of law enforcement of?cers because the list of factors an of?cer could consider in order to determine a driver’s impairment allowed for too much discretion. Ambrose, 15 Fla. L. Weekly Supp. 343d.

In Ambrose, the Court recognized, “The question becomes then what does the word ‘impairment’ mean to the of?cer doing the test? Do any one of the factors in C-G count, or does it take some combination of factors? There is no answer to that question [in the plan].”

Requirements for the Operational Plan in a Florida DUI Checkpoint 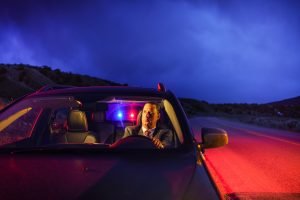 The prosecution must also show that the sobriety checkpoint plan is in compliance with the holdings of the Florida Supreme Court and District Courts of Appeal. The checkpoint was conducted pursuant to a written, pre-determined plan which contained specific criteria to limit the conduct of the individual officers on the scene.

Requirements include the following:

If the officer determined it was necessary, they would then question the driver as to where the driver was coming from, whether they had been drinking and where they were going. The plan often includes a list of standard indications of DUI.

Deviations from the DUI Checkpoint Guidelines

At the motion to suppress hearing, the court will hear testimony about whether the guidelines were followed on the night of the checkpoint and whether any officer observed deviations from the guidelines.

In Schleter v. State, 15 Fla. Law Weekly Supp. 1062b (Fla. 15th Jud. Cir. Sept. 10, 20085) the Appellant appealed the denial of his motion to suppress the results of a search that took place after he was stopped at a police roadblock, arguing that the officers exercised unfettered discretion in determining how thorough an inspection to impose on each driver, rendering the plan unconstitutional. Schleter, 15 Fla. L. Weekly Supp. 1062b.

The issue before the Court was whether the roadblock in question violated the Fourth Amendment by providing too much discretion to the officer making contact with the drivers. The court in Palm Beach County concluded that the plan used at the roadblock was constitutional because of the detailed written guidelines and the minimal discretion given to officers conducting the roadblock.