Florida is well known for its pain clinics, which prescribe more oxycodone pills than every other state. Down I-75, known unofficially as Oxy Express, doctors are at risk of extra scrutiny on their treatment of patients in dosing out oxycodone and other pain medications.

With these new leads and the same old tactics of a traffic stop or undercover drug buy, police have performed a crackdown on prescription drug distribution in Broward County. If you have been arrested or suspect you are under investigation for prescription drug possession or distribution, Meltzer & Bell, P.A. can get to work on your defense immediately.

Attorneys Lawrence Meltzer and Steven Bell are available around the clock because we understand the stress of being arrested. Our number one goal is to have your charges reduced or dismissed with as little damage to you as possible. Meltzer & Bell, P.A. represents clients charged with prescription drug possession, prescription drug distribution, doctor shopping, and prescription drug fraud.

With a defense team of a former Broward County prosecutor and a public defender, Meltzer & Bell, P.A. has extensive experience with controlled substance violations and the necessary work to defend your case. Call (561) 557-8686 today to set up a free consultation if your case is in Palm Beach County, Miami-Dade County, or Broward County.

All controlled substances in Florida are separated into schedules, or classes, which are meant to indicate their risk and addictiveness. Common prescription drugs are found in Schedule II, III, and IV.

Any amount in your possession, even a single pill, can be charged with a third degree felony punishable by up to five years in prison and $5,000 in fines. Felony offenses take away your right to vote, own a firearm, sit on a jury, and severely impact your employment.

Penalties such as these are a perfect example of why an experienced defense lawyer is invaluable. Meltzer & Bell, P.A. will explain a number of strategies to reduce or dismiss the charges, including discussion with the prosecuting attorneys, drug court, diversion programs, or pursuing a trial.

Meltzer & Bell, P.A. will also closely review the circumstances of your arrest and investigation. If any of the evidence has been obtained through an illegal search, we will move to suppress it, possibly eliminating the prosecution’s principle evidence.

Distribution or Possession with Intent to Distribute Prescription Drugs – Fla. Stat. § 893.13(1)(a) 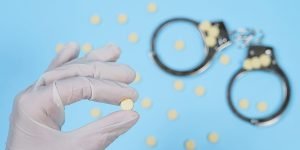 For Schedule II drugs, the penalty for a drug distribution is a second degree felony. This offense carries a maximum prison term of fifteen years and up to $10,000 in fines.

Distributing Schedule III and IV controlled substances may be punished with a third degree felony, up to five years in prison, and $5,000 in fines.

The government views a surprisingly small amount of pills as evidence of drug trafficking. Doctors whose exams are not sufficiently thorough for undercover agents and those pulled over and searched during a routine traffic stop can find themselves with very steep consequences.

Drug traffickers are those who knowingly sell, purchase, manufacture, deliver, or bring into the State of Florida, or who is knowingly in actual or constructive possession of certain amounts of prescription drugs.

Trafficking in 14 to 28 grams of oxycodone or hydrocodone carries a fifteen-year mandatory minimum prison sentence and $100,000 fine.

Trafficking in 28 grams to 30 kilograms of oxycodone or hydrocodone may be penalized by a 25-year mandatory minimum prison term and $500,000 in fines.

Obviously these penalties are extremely harsh. Because we hold every piece of the police investigation and prosecution’s case up to immense scrutiny, Meltzer & Bell, P.A. may be able to take prison time off the table in favor of diversion, probation, or dismissal.

The state is attempting to cut down on “doctor shopping,” or visiting multiple pain clinics to receive multiple and excessive prescription drugs, by requiring patients to tell their doctors they have received a similar prescription drug from a different provider within the past 30 days.

Also, if the patient is not truly in pain, but makes false representations in order to garner a prescription, the patient may be charged with fraud.

Both of these actions are third degree felonies with a possible five-year prison term and $5,000 fine.

The government sees the war on drugs as good guys versus bad guys. Meltzer & Bell, P.A. knows it’s much more complex than that. We don’t want to see you reduced to a number or file. Attorneys Lawrence Meltzer and Steven Bell strongly believe that putting a person in jail should be made a tremendously difficult task. Let us build the most rigorous defense for you.

Call (561) 557-8686 today to schedule a free, no-obligation consultation. You do not always get a second chance at witnesses, evidence, and your freedom.