Possession With Intent to Sell

In the War on Drugs, if you are accused of being a drug dealer, you are in the crosshairs of the government. Police and prosecutors aggressively target those who they suspect are selling drugs. Possession with intent to sell charges are usually serious felonies, and those charged are not eligible for drug court or certain other options.

If you are accused of possessing controlled substances with the intent to sell them, you are facing very serious consequences. A skilled attorney may make the difference between prison and freedom. An experienced West Palm Beach possession with intent to sell lawyer from Meltzer & Bell, P.A. can fight for your rights.

Our team consists of a former prosecutor and former public defender. You’ll always have one of our experienced partners with us. We will never farm your case out to an associate without criminal defense experience. All of our associate attorneys skilled and competent in all areas of criminal law. The partners are available to you 24 hours per day, seven days per week and are constantly involved in the strategies and outcomes in your case. Call us at (561) 557-8686 to schedule a free consultation.

We represent people being accused of selling narcotics in Palm Beach County, including people arrested in Delray Beach, Boynton Beach, Boca Raton, Wellington or anywhere else in the county.

Charges for Selling Drugs in Florida 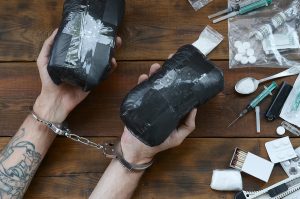 It is illegal to even possess any of the substances banned in Florida Statutes Annotated § 893.03 without sufficient legal permission. However, the charges may be greatly escalated if prosecutors charge a person with possession those drugs with the intent to sell, manufacture or deliver them.

A variety of factors may be used to show possession with intent to sell. Some of them include:

The amount is not always the condemning factor. For example, if West Palm Beach Police alleged they found, in your possession, a small amount of cocaine, but it was divided into baggies of eighths of an ounce, you may be accused of possession with intent to sell.

Florida law divides controlled substances into lists, called “schedules.” The penalties for possession with intent to sell will depend on the substances involved.

Schedules I and II contain drugs considered most serious by Florida lawmakers, including heroin, methamphetamine, cocaine, LSD (acid), MDMA (ecstasy) and more. Charges for these drugs are a second degree felony, punishable by up to 15 years in prison and a fine of $10,000.

Schedules III and IV include many types of prescription drugs. This offense is a third degree felony, punishable by up to five years in prison and a $5,000 fine. Schedule V drugs, which include certain prescription cough medicines, are a first degree misdemeanor, resulting in a year in jail and a $1,000 fine.

Possession with intent to sell charges are not eligible for options like drug court.

Prosecutors are required to bring evidence that proves every element of their charge beyond reasonable doubt. Your drug defense attorney will fight to show the holes in their case, and get your charges reduced or dismissed, or convince the jury to acquit you.

In many drug cases, the primary evidence is the narcotics themselves. The controlled substances were often found as a result of a search. The Fourth Amendment to the Constitution protects you against unreasonable searches and seizures. In many cases, a warrant is required. If police fail to follow procedure, the evidence may be thrown out, leaving prosecutors with no case.

Your lawyer can also vigorously cross-examine the state attorney’s witnesses to call into question any aspect of the case, including your intent.