The federal Act also provides that the governor of the state can submit written certification to the Secretary of the United States Department of Transportation that she or he opposes the revocation or suspension and that the state legislature has adopted a resolution expressing opposition to this law and still qualify for full federal funding. When that requirement is met, the state is eventually granted an exception.

Florida decided not to seek an exception. Additionally, Florida decided to make the revocation for a drug conviction for two-years instead of six months. Section 322.055, F.S., provides for the automatic suspension of the driver license of anyone convicted of a drug-related offense, whether or not the offense involves the use of a motor vehicle. After a conviction, the clerk’s office is required to report to Florida Department of Highway Safety and Motor Vehicles (DHSMV) all convictions for the following offenses:

The law applies to persons who are:

Hardship Driving after a Two Year Revocation for a Drug Conviction 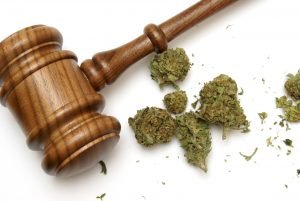 Florida Statute Section 322.055(1)(2)(3) and (4),  provides that the court may, in its sound discretion, direct DHSMV to issue a license for driving privileges restricted to business or employment purposes only, as defined by s. 322.271, if the person is otherwise qualified for such a license.

A driver whose license or driving privilege has been suspended or revoked under this section or s. 322.056 may, upon the expiration of 6 months, petition DHSMV for restoration of the driving privilege on a restricted or unrestricted basis depending on the length of suspension or revocation.

After the required minimum six months, an offender is eligible to petition DHSMV for a reinstatement. If he or she has been evaluated as needing and finishes a drug treatment program, the offender automatically becomes eligible for a full reinstatement under s., 322.055, F.S.

The Department of Highway Safety and Motor Vehicles (DHSMV) validates treatment program completion when the offender shows proof of completion of such program to a licensing office or tax collector.

Who Revokes the Driver’s License?

Can I Withdraw My Plea if I Didn’t Know About the Driver’s License Revocation?

In Daniels v. State, 716 So.2d 827, 828 (Fla. 4th DCA 1998), the defendant pled nolo contendere to charges of possession of cocaine and marijuana, and the trial court revoked his driver’s license pursuant to section 322.055(1), Florida Statutes (1997). Daniels moved to withdraw his plea, arguing that because neither the trial court nor defense counsel had advised him that his license could be revoked, his plea was not voluntary under Florida Rule of Criminal Procedure 3.170(k). Id. at 828. The Fourth District held that the defendant was entitled to withdraw his plea because the revocation was definite, immediate, and automatic, and thus was a direct consequence of which the defendant should have been advised for his plea to be voluntary. Id. at 829.

The court determined the license revocation provision was rationally related to the legislative goal, rejecting the defendant’s argument that the statute was an arbitrary exercise of the state’s police power because a driver’s license could be revoked even though a motor vehicle was not used in the commission of the offense. Id. at 1060. “[[D]]riving is a privilege, and the privilege can be taken away or encumbered as a means of meeting a legitimate legislative goal…. Accordingly, subsection 322.055(1) is constitutionally valid even without the requirement that a motor vehicle be used during the commission of a crime.” Id.