When domestic violence occurs, the victim can seek an order of protection against domestic violence (often called a “restraining order”). A protective order comes with serious direct and indirect consequences. If it is granted after the full hearing, it will show up in even the most basic background check. The issuance of a restraining order, unless it is dismissed on the merits, might impact your ability to further your education, find a job or even rent an apartment.

If someone files for domestic violence injunction against you, that person might be granted a temporary order that will last for no more than 15 days. After you are served with that temporary order, you will be notified of the return hearing date with an opportunity to be heard at the return hearing. At the return hearing, you have the the right to testify, question the petitioner, call other witnesses, and present additional evidence showing that the accusations are false or exaggerated.

Because these allegations are civil but quasi-criminal in nature, it is in your best interest to have a criminal defense attorney help you at every stage of the case.

Attorney for a Protective Order for Domestic Violence in West Palm Beach, FL

If you are facing accusations of domestic violence in Palm Beach County and the accuser is seeking a protective order against you, you can have an attorney on your side. At Meltzer & Bell, P.A., our experienced West Palm Beach lawyers will argue why an order of protection against you is unwarranted.

If you have been served with a petition for an Order of Protection in Palm Beach County, contact us immediately at (561) 557-8686 to set up a consultation. We are available 24 hours per day, seven days per week, and time is of the essence in these cases. You will speak to an experienced attorney — not someone new that we hand the case down to.

Pursuant to Florida Statute Section 741.30(6)(b), when determining whether a petitioner has reasonable cause to believe he or she is in imminent danger of becoming a victim of domestic violence, a court “shall consider and evaluate all relevant factors,” including, but not limited to:

Before the trial court can issue an injunction for protection against domestic violence, the petitioner must demonstrate an objectively reasonable apprehension that they are in “imminent danger of becoming the victim of any act of domestic violence as provided in Florida Statute Section § 741.30(1)(a). In making that determination, the trial court will consider the current allegations, the parties’ behavior within the relationship, and the history of the relationship as a whole.

Under Florida Statutes § 741.28, domestic violence is defined as an act of violence, including offenses like assault and battery, against a family or household member. A family or household member could be a spouse, child, relative or person the accused lives with. Additionally, Florida Statutes § 784.046(1)(d) defines dating violence as an act of violence against someone with whom the accused is in a significant romantic or intimate relationship.

In cases of domestic violence or dating violence, the victim has the right, under the statute, to petition for an order of protection, often called a “restraining order” or a “no-contact order,” if he or she has reasonable cause to believe he or she is in imminent danger of becoming a victim of violence again.

The person filing for an order is called a “petitioner.” The person against whom the order is filed is called the “respondent.”

Right to a Hearing for Permanent Order of Protection 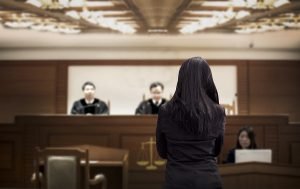 This is an ex parte matter, meaning the respondent does not have a chance to weigh in. If you receive notice of a temporary order, there is little you can do but abide by it. It will last up to 15 days.

At the hearing, the petitioner must present evidence why a permanent order is necessary. The evidence must show reasonable cause that he or she will be a victim again, and the evidence must be “strong and clear” (Kopelovich v. Kopelovich, 793 So.2d 31 (2nd DCA 2001)). This is a much lower standard of evidence that to convict a person of a crime (beyond reasonable doubt).

However, your attorney can vigorously fight the order, showing weaknesses in the petitioner’s case or presenting evidence that shows that the petition is based on misunderstandings.

Statistics on Orders of Protection in Florida

In the 2016-17 fiscal year, out of the 87,711 orders for protection against violence filed, the distribution of those cases across the five categories were listed as follows:

Seeking a Lawyer for a Protective Order Against Domestic Violence in Palm Beach County, FL

At Meltzer & Bell, P.A., we can represent you both on criminal domestic violence charges and on related protective order matters in Palm Beach County courts. If you were served with an injunction for protection against domestic violence, then seek out an experienced criminal defense attorney to represent you in this civil but quasi-criminal matter.